Anyone who's had experience preparing the Thanksgiving turkey can recount a personal horror story. Birds not properly defrosted, burnt skin, dry breast meat, lumpy gravy...the list goes on. Finally, after 30 years of failure and experimentation, I think I'm getting the hang of it.

I brined the turkey for a day--two days makes it too salty, a half-day doesn't season or moisten it enough--and roasted the 22-pound tom at 250 degrees for nearly six hours. Some cooks recommend that the heat be 325 degrees or higher because of concerns about bacteria, but I've found that the higher temperature makes the exterior flesh too dry, at least in our oven. When the temperature probe stuck deep into the thigh area measured 170 degrees, we were assured against illness (indigestion doesn't count). 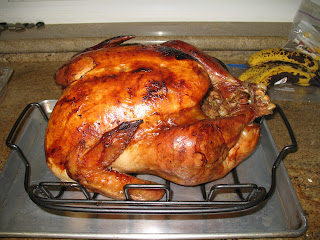 Unable to resist tinkering with last year's recipe, I started the turkey breast-side down in order to brown the exposed back. Two hours was enough, and I turned the bird over. Waiting much longer risks the flesh becoming too soft and events taking a disastrous, er, turn.

Covering the bird with foil was unnecessary because the brine and lower roasting temperature kept the turkey moist. Basting with pan juices once an hour resulted in golden brown skin.

After the probe pinged, the turkey was pulled from the oven and the next hour was spent making the gravy, spooning the stuffing, and carving the roast. The critics praised the result and helped themselves to seconds and even thirds. Was it hard to make, they asked. No, it was easy, said sincerely.
Posted by Stephen at 1:21 PM No comments:

Recology will replace Allied Waste as our garbage collection company in January. Today Recology distributed three new carts to each house in the neighborhood, and the service promises to be a great improvement. 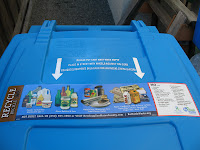 1) No longer will we have to separate our paper, plastic, and cans into separate boxes. All recyclables go into the blue cart.

2) The carts have signs to remind us which materials go into each. The signs are laminated to resist weather.

3) The black cart they gave us looks durable and expensive. Now I won't have to shop for a new garbage can. (I'm noticing that procrastination can be rewarding; sometimes problems do go away.)

4) Every week--formerly it was every other--we can put the recyclables and greens by the curb. I have mistakenly brought out the containers on non-recycle day, or not put them out when I should have. (Looking at what the neighbors are doing is not 100% reliable, because sometimes they're wrong, too.)

Communication can still be improved. I was all set to start using the carts this week--opportune timing for the Thanksgiving trash--when a few clicks informed me that the service will start in January. Anticipation increases the excitement, I suppose.
Posted by Stephen at 5:33 PM No comments:

When I first heard a speaker use the phrase “deep dive” last month (as in “explore in depth the topic we are discussing”), I thought his choice of words was clever; it summarized succinctly what he was doing, and even people unfamiliar with the term knew what he was talking about. “Deep dive” has actually been floating around in the consulting dictionary for years and has begun to enter the mainstream on magazine covers and TV business channels.

Last week I reviewed our consultants’ 100+-page Powerpoint presentation on industry strategy and found the overuse of the term to be irritating. The report covered a variety of topics, and after introducing each one proclaimed that it was about to deep-dive into the subject. Just tell me what you found, for crying out loud, and let me decide if you’ve covered it adequately.

My entrancement, then disenchantment, with “deep dive” is a mild example of the Feiler Faster thesis, which states that information is absorbed at such a pace that reversals of fortune (in sports, entertainment, business, politics, etc.) can occur overnight. I hope the phrase sinks into oblivion.
Posted by Stephen at 7:52 AM No comments:

Put Your Thumbs Down

When I first entered the world of business there were still clubs whose dining rooms discouraged explicitly commercial discussions. Notepads and pens were to be kept off the table, and ladies and gentlemen engaged in the art of conversation with each other because cellphones did not exist.

That societal aspiration has been obliterated. Three decades ago a movie that was purely a dinner conversation captivated the critics; now it’s nearly unknown to the under-30 crowd. No longer do we look attentively at our meal companions. Our focus is on the small glowing screen, fingers pecking messages to people whom we rarely meet face-to-face.

Last week we imposed a new family rule: when more than one person is at the table, the machines are shut off. We’re starting to rediscover each other, but we'll see how long that resolution sticks. (How well I follow my own dictate will be tested if there’s breaking news on time-sensitive investments.)

The advertising campaign for Windows Phone 7 amusingly illustrates some of the dangers of becoming too involved with our smartphones.

Microsoft's claim that its mobile product contains more "glanceable" information is questioned by the WSJ's tech writer, Walt Mossberg. Nevertheless, kudos to MSFT for a witty ad.
Posted by Stephen at 6:01 PM 1 comment:

When Barack Obama and his fellow Democrats swept into office two years ago, they misread their mandate. A large majority voted for the Democrats in 2008 simply because they were not Republicans. Nearly everyone was tired of George Bush, tired of his wars (although Iraq did appear at last to be turning the corner) and fearful of a collapsing Wall Street. The 2008 Republicans did not deserve to be re-elected, and most independents and even many Republicans agreed. The GOP’s message of “I’m bad but the other guy’s worse” had predictable results. The Democratic wave that began in 2006 crested in 2008. The Democrats would probably have won anyway, but the fact that they had an attractive candidate sealed the deal.

The President and his party immediately began pursuing the liberal agenda: much greater government control of the economy, more government assistance for those viewed as “not rich”, and an end to the Iraq war. The voters, however, mainly wanted him to save the banking system from collapse and let the resilient economy recover like it normally does within 18-24 months.

All the President had to do was not make things worse. By November, 2010, with the economy and jobs on the upswing, the mid-term elections could well have made the Democratic Congressional majority even more lop-sided.

The large banks and Wall Street did survive—one cheer for that—but the pursuit of the liberal agenda birthed a health-care monstrosity filled with consequences unknown and unintended. The entire health-care sector and employers everywhere hesitated to hire as the citizenry tried to digest the health care bill. (Plopping 2,700 pages of far-reaching legislation into the economy’s midst is like Microsoft slamming 2,700 pages of code into Windows 7 without any testing.)

Once a derogatory meme takes hold—witness Gerald Ford and Sarah Palin's example—it becomes impossible to shake. The President’s supporters in the media are doing their best to tamp it down, but after the slow reaction to the BP oil spill and the failure of the stimulus package, the whiff of incompetence has become inescapable.
Posted by Stephen at 12:00 PM No comments:

A New Yorker article on procrastination: It explains a lot about why my open items get rolled forward for months. A few of the useful ideas and terms from the piece:

Procrastination is a basic human impulse, but anxiety about it as a serious problem seems to have emerged in the early modern era.

[Procrastination is] a powerful example of what the Greeks called akrasia—doing something against one’s own better judgment.

Hyperbolic discounting - as the present gets closer, short-term considerations overwhelm their long-term goals. [Example: movie rental lists, where for the movie they wanted to watch immediately, people tended to pick lowbrow comedies and blockbusters, but when asked what movie they wanted to watch later they were more likely to pick serious, important films (that never get watched when the time comes)].

The divided self – we are composed of divided selves constantly “competing and bargaining” with each other. [Pleasure-seeking self wants to watch TV in the future, so will allow hard-working self to win in the present….sometimes.]

For all our contemporary insight it’s not clear that our understanding has progressed much beyond that of the ancients. They named the seven deadly sins (pride, greed, envy, lust, anger, sloth, and gluttony), four of which I have trouble with and without which my procrastination would be largely cured. Or it just may be the devil that overpowers my angelic self when it comes time to turn off the television or put the ice cream back in the refrigerator.

Where has the time gone? There are three things I was supposed to do today but (yawn) that nap looks inviting.
Posted by Stephen at 11:36 AM No comments:

Email ThisBlogThis!Share to TwitterShare to FacebookShare to Pinterest
Labels: Psychology

There are few moments in life—including happy events like weddings and births—where joy is so overwhelming that shouts and tears mingle, the arms lift in triumph, and one has to jump up and down lest one explode. In living rooms, bars, restaurants, electronics stores and wherever there was a television set last night, Northern Californians gave themselves over to the moment.

Old-timers say the spontaneous outpouring reminded them of V-J day, which marked the end of history’s most terrible conflict. Last night’s World Series victory for the San Francisco Giants celebrated “just a game,” but to the many for whom baseball is a metaphor, a reverie, an escape, a reminder, and a bequest the event was a lifetime in the waiting.

When the Giants moved to San Francisco in 1958, the future was pregnant with possibility. Some of the best players of the mid-century—and Willie Mays, who is on the short list of baseball’s greatest players ever—were on a New York Giants squad that had won the World Series in 1954. The Giants won the National League pennant in 1962 in the new Candlestick Park and lost a thrilling World Series to the Yankees in seven games, but no worries, with their talent everyone believed that they would soon get other opportunities. (The change in scenery didn’t bother their perennial National League rival, the Dodgers, who also moved west in 1958 from Brooklyn; the L.A. Dodgers beat the Yankees in the 1963 Series.) In the 48 years that followed until last night, the Giants had only two more chances, both unsuccessful, to win baseball’s crown.

Every San Francisco fan has his or her own story of hopes raised and dashed. We endured freezing night games at Candlestick to cheer Will Clark, Kevin Mitchell, Jeff Leonard, and Mike Krukow. We rooted for admirable players of talent and character to win a ring, but they never did. After 52 years we learned to reconcile ourselves to things that will never be, like a Giants title.

From the days I first heard gravelly-voiced Lon Simmons broadcast Giants (and 49ers) games thousands of miles away to my little Sony transistor radio in Honolulu, I’ve waited, then stopped waiting, for this moment. With little warning it’s here, followed by the shouts and tears.
Posted by Stephen at 9:54 AM No comments: