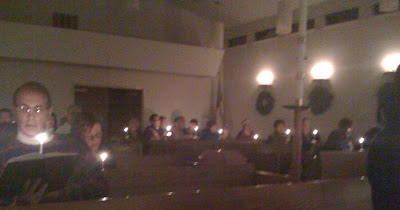 After a hectic day of touring San Francisco, a last-minute visit to the doctor (everything turned out copacetic), and a family gathering at a local restaurant, we went home to change. We tucked, pushed, and squeezed into our coats, ties, non-denim pants, and dresses.

The weather outside was frightful, and attendance at the "midnight" (actually 10:30) mass was down from last year. The choir began singing at 10 PM, and we listened quietly to the familiar carols. The atmosphere was more contemplative than joyous. The church seemed to be a haven from the storms outside and the tumult of a stress-filled year. A handful of happy teens showed up, brightening our spirits and inviting hope that the Episcopal church will survive for at least one more generation.

Kneeling to the strains of Silent Night, we lit our candles, symbolic of that evening two millenia ago when the Light came into the world and told us that Darkness is not our ultimate fate. Gloria in Excelsis Deo.

Posted by Stephen at 9:29 AM No comments: 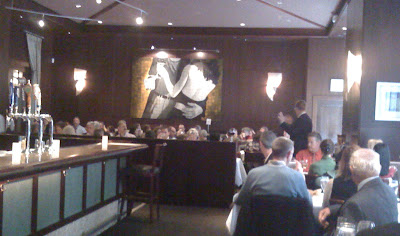 It’s been a rocky year for the investment company that I work for. Not only has our cost of funds escalated dramatically (at least we can get funds if we need them), but more customers are defaulting. Cash cushions are dwindling to an uncomfortable level, and some of the younger finance folk are getting nervous about both the company and their personal situations. Suppressing my doubts, I reassure them that these times will pass.

If you have the funds, it’s a good time to be buying. Asset prices have plummeted in nearly all categories. But cash alone is not sufficient to be a player. You need nerves and the courage to back your judgment.

This week we plunked down some precious cash and assumed some debt to make a major investment in almost-new transportation equipment. If we return to a normal business environment in short order, this purchase will be a great performer. If not, well, I’ll send my resume to the government like the rest of the nation’s jobseekers.

So an otherwise difficult year ended on an uptick, making the holiday party at the Cosmopolitan Café unexpectedly cheerful. We washed down the pupus with champagne and marveled at the youthful appearances of the retirees. Their faces had fewer lines than on the day they left. Whether we're working toward retirement or just a bigger paycheck, for this afternoon most of us really believed that next year will be better. © 2008 Stephen Yuen
Posted by Stephen at 11:18 PM No comments:

After being helplessly subjected to a yearlong financial meltdown that few Americans understand---who amongst us can explain how mortgage securitizations and credit-default swaps are supposed to work, much less why they malfunctioned?--it’s refreshing to see that an old fashioned swindlers’ device is alive and well.

Bernard Madoff executed the biggest illegal Ponzi scheme (Social Security is legal, hence the qualifier) in history. The aftershocks threaten to bring down some financial institutions that made it through the subprime earthquake. Many wealthy individuals are no longer so wealthy, and a few have been wiped out.

Mr. Madoff built up his reputation over decades. He wouldn’t accept just anyone as a customer:

In cultivating an aloof mystique, Mr. Madoff had fooled those who fancied themselves the wiser. Typically, investors needed at least $1 million to approach Mr. Madoff. Being a member of this club also helped. But even with those prerequisites, there was little guarantee that Mr. Madoff would take the client.

We’re living in a strange period when one can be grateful for not being richer or more successful. If you’re at the top of the heap in a large organization, you can be arrested, deposed, subpoenaed, and/or sued for events for which the law or media says you’re responsible, although you may really not know much about what transpired.

Or if you’ve accumulated a sizeable nest egg that you’ve entrusted to advisors with unimpeachable reputations, your wealth can still vanish overnight because of incompetence or thievery or bad luck. As for the rest of us, our struggles may be frustrating, but they are nothing compared to the miseries of the poor fallen fellow who has to start all over. Paradise Lost is worse than Paradise Never Found. © 2008 Stephen Yuen
Posted by Stephen at 8:25 PM No comments:

Hope For Us All

The news lately has been filled with examples of massive greed, venality, and evil (have you forgotten about Mumbai already?). It is easy to give in to despair. In the face of catastrophe, one man transcends the human condition.

A grieving father and husband who lost his wife, two young daughters and mother-in-law when a Marine fighter jet crashed into their home on Monday thanked everyone who has supported him and said he does not blame the pilot of the disabled plane….

Speaking slowly, pausing between thoughts, [Dong Yun] Yoon asked the public to pray for the jet's pilot, who ejected safely in a canyon about two blocks from where the plane crashed, first on the street and then into Yoon's house.

“I don't blame him, I don't have any hard feelings. I know he did everything he could,” Yoon said.

This young father, an immigrant from Korea, lost everything. But he not only refused to lash out, he is praying for the pilot. We are entering the season that commemorates when the light came into the world. Mr. Yoon’s example shows that the light still shines. 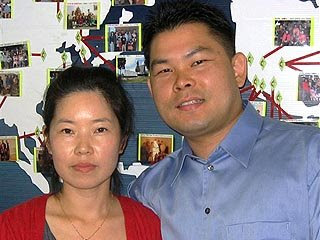 Posted by Stephen at 7:43 AM No comments:

Arizona Memorial in 1995
On December 7, 1941 Japanese bombers obliterated the U.S. fleet at Pearl Harbor. My father, a junior at McKinley High, saw the silver planes flying overhead on that clear Sunday morning but didn’t realize anything was out of the ordinary until he saw smoke rising from the Ewa (western) direction of Oahu.

It was a day that changed everything. Millions of Americans answered the call.

Arizona Gun Turret
While the majority survived the War with life and limbs intact, hundreds of thousands did not, like my wife’s uncle. Some found the armed services to be to their liking and made it a career, like my uncle who was the best auto mechanic I ever knew. Others, like my father-in-law, seized the opportunity offered by the GI bill and went on to college and jobs that they would never previously have considered.

At the U.S.S. Arizona memorial the names of the fallen are inscribed on the wall. Are we worthy of their sacrifice? Perhaps......if we preserve, protect, and pass on the gifts they have given us.
Posted by Stephen at 12:55 AM No comments:

Much To Be Thankful For

At work we’re experiencing the same stresses as are other companies: higher borrowing costs, softening demand for our products, and more uncertainty in planning. Shall we go ahead with purchases and hirings that make sense in normal or even slow times? If we’re in the midst of a long and deep recession, all bets are off.

Raises and bonuses will be minuscule this year, despite everyone working harder than ever. (Since I’ve been in the workforce it seems that every twelve to fifteen years the managers make the rounds saying, “Your bonus is you get to keep your job.”)

No, today’s travails aren’t as bad as the gas lines that we saw during the Seventies, or the 15% mortgage rates during the Eighties, but there’s enough pain and fear to instill conservative life lessons in this latest generation of risk-takers.

Baby-boomers bite their tongues when our sons and daughters proclaim current miseries to be the “worst” ever....this in a period when obesity, not starvation, is America’s principal health problem, and multiple Libraries of Congress are instantly accessible via cellphone. Boomers know that listening to such breathless exclamations is our penance for ignoring and even sneering at our own parents’ tales of real hardship. Today’s problems are nothing. We’re just at the bottom of a cycle, these times will pass, and there’s much to be thankful for. © 2008 Stephen Yuen
Posted by Stephen at 2:08 PM No comments:

On Thanksgiving Day I fought off the sinus infection with Tylenol and Claritin and woke before sunrise to begin dinner preparations. I emptied the plastic bag containing the 22-pound tom, which had been soaking for 36 hours in a solution of salt water, sugar, and spices. My responsibilities for the day consisted of the turkey, stuffing, gravy, broccoli, and a de-boned lamb leg that had been marinating in the fridge.

It had been years since Thanksgiving had been held at our house, and my multi-tasking abilities would be stretched to the limit. I reflected not for the first time how management scientists could have saved themselves the trouble of making factory field trips by just watching their mothers in the kitchen during Thanksgiving.

The turkey was in the oven by nine a.m. and the lamb leg joined it at two. Somewhat miraculously, the gravy, broccoli, and stuffing came together without mishap, and all the dishes were completed about the same time. As planned, the brine had made the breast moist and flavorful, so covering the turkey with gravy was merely an option and not a requirement. 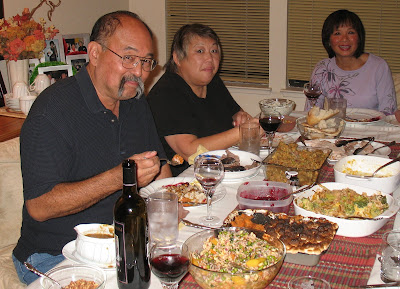 Guests arrived with salad, yams, cranberry sauce, and dessert. After I said a few words of thanks, we sat and began our meal. We lingered four hours at the table, talking about everything under the sun. Later there would be clean-up (not by me, thankfully), wrapping and tupperwaring of leftovers, and feelings of regret about overeating. But for the moment there was bliss. 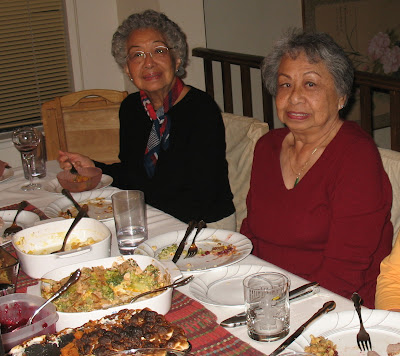 May you, dear reader, have had your own such moments during the past week. © 2008 Stephen Yuen
Posted by Stephen at 1:00 PM No comments: