A Fool and His Money

My investment record is littered with emotional decisions and bad choices. But once in a while, just as in golf, I make a good shot and continue to delude myself into thinking that maybe, just maybe, I’ve got some talent and that the future will be better than the past.

One of my successes has been to invest in overseas mutual funds a few years ago. They’ve been generating spectacular returns (over 20% per year). Not only have foreign company stocks been performing well when viewed against their home currencies, the returns have been turbocharged because those currencies have strengthened dramatically against the dollar.

But I sense the dollar has moved too far down, too fast, especially against the euro. So on November 20th, I shaved my foreign holdings in favor of good old American stocks and bonds.

Stock market bottoms are reached when years of decline, interrupted by dead-cat bounces that raise false hopes, cause even the most optimistic bulls finally to throw in the towel. When everyone wants out, that’s the time to get in. If it were a stock, it would be time to buy Iraq.

That call was a little early, but I’m getting the same vibe about the dollar.
Posted by Stephen at 7:14 AM No comments:

Kicking Off the Pacific Century

There's only one major college football team who remains undefeated. They've never been this close to a national championship bid, much less the Top Ten. As this sportswriter asks, "Why Not Hawaii?"
Posted by Stephen at 11:48 AM No comments:

It was the day before Thanksgiving, and the traffic reports from the East Bay were discouraging. Highways 80, 880, 580, and 680 were rife with accidents and stalls, so the road to San Diego this weekend led south to San Jose.

Unless they’re sightseeing along Hwy 101, most LA-bound travelers from the South Bay cut east on Hwy 152, the Pacheco Pass Road south of Gilroy, to the speedier Hwy 5. On Wednesday the single-lane road was partially under construction and packed with big rigs. The journey to the Hwy 5 on-ramp took us four hours when it normally takes two. Not a promising start to the long weekend.

The rest of our journey passed without incident, and we averaged about 70 mph on the moderately crowded freeway. North of LA the traffic coming toward us was bumper to bumper and noticeably slower. They work and live in Southern California but don’t recreate there.

We unloaded the car at midnight and greeted our student happily. Thanksgiving should be spent with family. It was worth the effort. 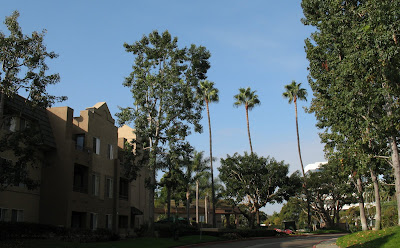 Thanksgiving morning, near the UCSD campus.

Philosopher-mathematician Bertrand Russell said that human happiness consisted of four ingredients: health, freedom from material want, warm personal relations, and successful work. On this Thanksgiving Day there is currently no pressing concern in any of these areas, and, in accordance with Lord Russell’s formula, in my daily life I am reasonably happy.

Regarding disappointments, I have only myself to blame. I wish that I exercised more, that I made better investment decisions, that I was a more giving and communicative friend, and that I was better at self-promotion so that my outstanding abilities would be more recognized at work (:>). But there’s still time to correct these mistakes.

On this Thanksgiving Day, I remember those who are gone and am reminded that life itself is the greatest gift. Living near one of the most beautiful cities in the world is just icing on the cake. As you reflect upon your own life, may you be blessed with a similar attitude of gratitude. © 2007 Stephen Yuen
Posted by Stephen at 9:00 AM No comments:

To Honor A Hero

After the game (previous post below) we retired to the San Mateo High quadrangle, where the class of 1957 hosted a barbecue for all comers. But the occasion was much more than a 50th reunion. We were there to witness the presentation of a wrought iron bench to honor '57 graduate Paul Foster.

The high school choir sang an a capella rendition of the Star Spangled Banner as we stood at attention. Poised and harmonious, the choir with their perfect intonation hushed the crowd. As the rains came, speaker after speaker rose to reminisce about Paul Foster. A Marine honor guard stood stoically through the downpour, and none of us dared do less. Paul was a quiet youth who grew up a few miles from San Mateo High. He had a mischievous streak with his friends but was shy around girls. After high school he enlisted in the Marines and went to Vietnam.

[From his citation]
In the early morning hours the 2d Battalion was occupying a defensive position which protected a bridge on the road leading from Con Thien to Cam Lo. Suddenly, the marines' position came under a heavy volume of mortar and artillery fire, followed by an aggressive enemy ground assault. In the ensuing engagement, the hostile force penetrated the perimeter and brought a heavy concentration of small arms, automatic weapons, and rocket fire to bear on the battalion command post. Although his position in the fire support coordination center was dangerously exposed to enemy fire and he was wounded when an enemy hand grenade exploded near his position, Sgt. Foster resolutely continued to direct accurate mortar and artillery fire on the advancing North Vietnamese troops.

As the attack continued, a hand grenade landed in the midst of Sgt. Foster and his 5 companions. Realizing the danger, he shouted a warning, threw his armored vest over the grenade, and unhesitatingly placed his body over the armored vest. When the grenade exploded, Sgt. Foster absorbed the entire blast with his body and was mortally wounded. His heroic actions undoubtedly saved his comrades from further injury or possible death.

Sgt. Foster's courage, extraordinary heroism, and unfaltering devotion to duty reflected great credit upon himself and the Marine Corps and upheld the highest traditions of the U.S. Naval Service. He gallantly gave his life for his country.

Paul Foster was awarded the Congressional Medal of Honor in 1969. 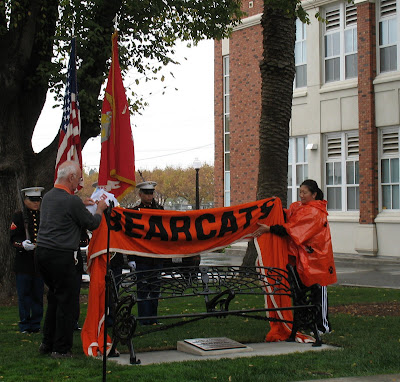 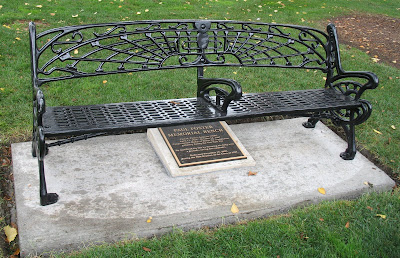 Posted by Stephen at 5:29 PM No comments:

Little Big Game
One drawback of globalization is the paving over of regional distinctions. WalMart demolishes Mom-and-Pop grocery stores, IHOP closes the corner diner, and Borders makes the independent bookseller a fading memory.

A more insidious phenomenon is the derogation of the local hero. In every area of endeavor the best in the world, maybe the best there ever was, is but a mouseclick away. Why should we attend a cello recital when we can tune in to Yo-Yo Ma? Shooting par golf doesn’t mean much when we can watch Tiger regularly belt 300-yard drives.

High school football was “the” weekend event before the NFL blanketed the country with live telecasts. Some high school games in my hometown attracted sellouts of 25,000 at the old stadium. It was also a time when everyone watched only three channels on TV; the old gang has broken up and we’ll never assemble those crowds or that passion again.

At the little big game last Saturday between the Burlingame Panthers and the San Mateo Bearcats a noisy gathering of about 2,000 students, alumni, and parents cheered the combatants. Burlingame High won easily, 42-10, on San Mateo’s home field, but neither team was going to the playoffs and it was difficult for an uninterested parent to be invested in the outcome.

Halftime at the Little Big Game

I asked the youngster how he felt about the game, given the Bearcats’ shellacking and jeers from the Panthers’ rooting section. He was hoarse from cheering and smiled. He had enjoyed the camaraderie and knew that a high school football game wasn’t a matter of life and death. Youthful passion can be wonderful, but perspective is better. Maybe he’s grown up a bit since the last time. © 2007 Stephen Yuen
Posted by Stephen at 11:59 AM No comments:

The Year of the Pig 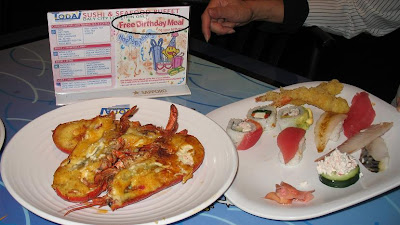 The lobster tail is featured on weekends.

Buffet restaurants appeal to my worst instincts. When gluttony wars against self-control, self-control is the loser, and I’ve learned not to go near all-you-can-eat joints. But the laws of the universe are suspended on one’s birthday, so after a four-year hiatus I revisited Todai in Daly City. (The clincher to the decision was Todai’s offer of a free meal--photo ID required—on one’s birthday. Gluttony and greed--two deadly sins to which I still easily succumb.)

On the first plate I heaped piles of sushi and sashimi, while on the second I grabbed a generous helping of steak and crab. My digestive system was strained to the breaking point, but the pastry bar sang its siren song. Assorted cakes and chocolates pushed the body mass needle into the red zone. It was only early November, but I was fortified for the winter. © 2007 Stephen Yuen
Posted by Stephen at 5:00 PM No comments:

Time to Join the Party

The under-30’s are all logged in to social networking sites, so it was time for me to join the party. It took but a minute to register with Facebook and summarize my life on the equivalent of a 3x5 postcard. Rejecting a more flattering photograph from 20 years ago, I decided to upload a recent snapshot. I’m not looking for a lot of new “friends” or trolling for dates. Yes, Gramps, that’ll keep the kids away.

After setting up the page, I was immediately filled with remorse (not buyer’s remorse because registration is free). I have enough trouble maintaining human contact with the flesh-and-blood friends whom I do have and certainly don’t have time to “poke” new ones (no, I don’t know what that means in Facebook-ese, and it’s another sign of civilization’s decline if teens are using that term indiscriminately.)

So I’ve kept a very low profile and not sent invitations for strangers to be my friend, and so far no one wants to be mine (sniff). But that’s okay, as I tell my kids, it’s their loss.

Here are links to a couple of older generation Facebook newbies who describe their experiences. They actually find Facebook to be useful and like it. © 2007 Stephen Yuen
Posted by Stephen at 8:46 AM No comments:

Last week started by confronting long-running thorny tasks that resisted completion---crafting a presentation on a structured investment vehicle and evaluating several speculative equipment purchases that will span a number of years. Adding to the obstacles was the fact that we’ve had some turnover in our senior management, and not all the new players are familiar with how we arrived at our current analytical approaches. Many issues raised in recent management meetings had already been deliberated and decided in the past, but there’s a new generation to educate and we’ve had to retrace our steps over old ground.

Sometimes there’s no alternative but to “go into the tank”, as one of my college friends used to say, and power through projects. There were some hiccups mid-week over some esoteric problems that were likely never to surface, and it was enormously tempting to let them slide. But noontime walks in the San Francisco sun stiffened the resolve, so I spent a few more hours finishing the projects the right way.

On Friday the group heaved a collective sigh and celebrated the (successful) completion of a trying week with margaritas at Chevy’s. It was also my birthday, and I was happy to lift a glass to another spin around the sun. The passage of time is no longer a source of dread; I’m another year closer to getting back from Social Security what I’ve been putting in for decades and I’ve earned another year’s credits in my employer’s retirement and benefits plan. 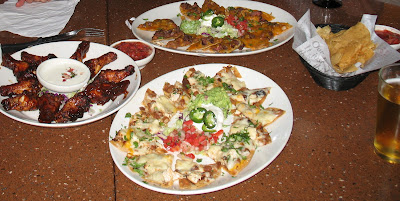 Chevy's pupu plates are $3 each during happy hour.

The evening Cal Train was uncrowded and quiet, ideal for decompressing, and the margaritas provided a pleasing afterglow. I’ve been working all my life toward the golden years, but maybe, just maybe, they’ve already arrived and I just haven’t noticed. © 2007 Stephen Yuen