From a short reflection on Ronald Reagan, this observation applies to political leaders regardless of party:

Posted by Stephen at 9:39 AM No comments:

Email ThisBlogThis!Share to TwitterShare to FacebookShare to Pinterest
Labels: Politics


These are strange times. The national conversation this week is about an event that we were taught could never happen--a default by the U.S. Treasury on its obligations.

And last week I won a 13 Wonders limit hand in mah jongg, something that I've never done in over 40 years of playing the game.

At the opening I started with ten of the fourteen tiles necessary to complete the hand. It only took five draws for me to win. "I never thought I'd live to see it"---been saying that quite often lately.
Posted by Stephen at 11:29 AM No comments:

Is the Debt Ceiling Necessary?

Slate surveyed the nine living former Treasury Secretaries about the Federal debt ceiling. Four responded, and, unsurprisingly, the vote was 3 to 1 in favor of eliminating the ceiling altogether. Paul O'Neill, Treasury Secretary under George W. Bush, for the majority:

"It is hard to make a rational argument for the debt ceiling as it is now structured," he says. "Basically, the debt ceiling gives the Treasury the authority to borrow money to pay debts we already owe. As you know it doesn't authorize new spending."

From the perspective of a business executive like Mr. O'Neill the ceiling is only an impediment to the efficient operations of the U.S. Government--witness the volatility that the financial markets are going through as the Dow Jones Industrial Average fell 198.75 points today amidst speculation about the prospect of stopping government checks on August 2nd. (Avoiding a ratings downgrade is a separate, more difficult problem to solve.)

But our system is built not for efficiency but on the principle of checks and balances. It forces the branches of government to reach consensus on weighty matters such as waging war and judicial appointments. When the bodies are controlled by opposite parties, gridlock is frequently the result.

Congress uses the tools afforded by the Constitution to enforce constraints on a President of another party. Rather than cast a vote against the Vietnam war, Congress defunded it in 1973, thereby forcing America's withdrawal in 1975.

The House Republicans through the mechanism of the debt ceiling are attempting to restrict the spending that was approved by previous Congresses. They hold a weak hand because Republicans control only one half of the Legislative branch, and because they have to be mindful that a U.S. debt default next week may have potentially catastrophic effects on the global financial system.

In my humble opinion I think the Federal Reserve in concert with the U.S. Treasury has various tools to keep the money flowing well past the supposed deadline, but they've never been tested and would set a bad precedent for operating without Congressional authorization. As we approach August 2nd and the crisis mounts, however, we may yet see those tools in action.
Posted by Stephen at 4:44 PM No comments: 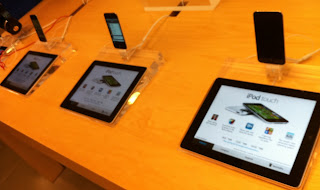 In the Apple Store product information is now displayed on iPads. Whether the questions concern a $2,000 computer or a sub-$200 music player, the customer obtains answers from a dedicated page on the adjacent iPad. Although the marketing advantages of an interactive display are readily apparent, it is nevertheless a little startling to see a $500 tablet hawking $150 iPods, like painting a Corolla billboard on the side of a Lexus.

Apple has a stellar history of many more marketing hits than misses, so we're not second-guessing this one. After all, the potential iPod customer may enjoy playing with the tablet so much that he walks out with an iPad instead.
Posted by Stephen at 1:30 AM No comments:

Making joong (the Cantonese word for various meats enclosed in sticky rice wrapped in ti leaves, then steamed, aka zongzi in Mandarin) is a time-consuming endeavor. Ingredients such as ti leaves, ham dan (duck eggs), and lup cheong (preserved sausage) are not found in your average American supermarket and, depending on where one lives, may require a special shopping trip to the nearest Chinatown. Even if one lives close to Asian grocery markets, certain ingredients such as the rice and belly pork require over an hour of preparation. It's usually not worth the trouble to cook up a batch from scratch.

When I feel a craving for a plateful of calories, fat, and sodium I head over to 99 Ranch to pick up a package of joong. The Foster City market carries three varieties, Cantonese, Hu Zhou, and Pork with Mushroom, each of which cost the same--three for $7.20.

It wasn't hard to obtain volunteers for a taste test. Consensus conclusions: 1) despite its pale appearance implying minimal soy sauce the "Cantonese tamale" was flavorful, aided by the piece of lup cheong; 2) the Hu Zhou-style joong consisted of just belly pork and rice (which were in the others as well) but had the most bulk; 3)the pork with mushroom version also had egg and peanuts. Group rankings were (1) Cantonese (2) Pork with mushroom (3) Hu Zhou.


The visitor from Hawaii said that she preferred the 99 Ranch joong to the ones available in Honolulu markets, so she will return with a bag. On my next trip to the Islands, I'll tell her about cousin Rebekah. © 2011 Stephen Yuen

Posted by Stephen at 2:03 PM No comments:

An Issue of Increasing Gravity

One of our acquaintances has been instructed to gain weight as she recuperates from surgery. She's the exception to everyone else we know, including ourselves, who have been told by their doctors to take off a few pounds.

The secret to weight loss may be simple--"Eat less, exercise more"--but that formula is difficult to adhere to over time. The temptations of immediate pleasure and/or sloth often overwhelm distant fitness goals.

Sometimes by trying to do the right thing we can make things worse. Years ago we switched from regular to diet soft drinks.Now there are studies that show, albeit not conclusively, that drinking diet sodas causes obesity.

Eating Chinese food can be beneficial because wok-prepared vegetables and meats are generally lower in fat and calories. However, going out to eat at Chinese restaurants may be worse than McDonald's. Take-out favorites such as General Tso's chicken or fried rice are high in sodium and fat. There's also some evidence that the popular additive monosodium glutamate (MSG) is another reason to avoid Chinese-restaurant food:


The [China Health and Nutrition Survey] found that participants who consumed the most MSG were 28 percent more likely to be overweight compared to those who consumed the least amount of MSG.

It is not entirely clear why higher consumption of MSG is associated with weight gain. However, the authors suspect that over time MSG intake prevents brain cells from responding to leptin. Leptin is a hormone that suppresses appetite and when brain cells no longer respond to it, this may lead to excess energy intake and weight gain.

Scientists keep coming up with more reasons we are fat, reminiscent of the time when they said that just about everything, it seemed, caused cancer. Thus it's not surprising that obesity itself is a leading cause of cancer:


Though scientists don't know why being obese increases cancer risk, they think it may be linked to hormones, according to the AP. Chubbier people produce more hormones, such as estrogen, that help tumors thrive. And big-bellied people have more stomach acid, which can lead to stomach and intestinal cancers.

Some say we’ll die of tumours
Some say of fat
Scientific studies’ rumours
Lean heavily toward tumours
Even if we don’t have rapid cell growth
We are so gluttonous that
To predict longevity we are loathe
We will succumb to fat
Or cancer or both.

(With apologies to Robert Frost.)
Posted by Stephen at 1:34 AM No comments:

What's in a Name

At one point in my career I made frequent trips to Japan. There I partook of many local foodstuffs but never opened a bottle of Calpis, not only because there were many other excellent drinks to be sampled but also because of the name, which in English sounds like the product of bovine micturation (or worse).

In the American market the bottles have been re-labeled as the more-palatable-sounding Calpico. Yesterday, I finally popped the top. The milky uncarbonated concoction was pleasant-tasting--slightly sweet with no chemical aftertaste. Because it's $2.69 for 1.5 liters and has near-zero nutritional value, it's unlikely I'll be buying it again. I drank about half the bottle and will try the rest with vodka, which makes every drink taste better.
Posted by Stephen at 8:42 AM No comments:

Non-violent crooks are caught because they often have to cover up their deeds by spinning ever-more elaborate lies. Performance must be maintained on an upward trajectory. The story is the same whether the topic is school testing, news reporting, or investment returns.

Individuals or organizations who never come back to the pack are vanishingly rare. There are only a few possible explanations for long-term advantage: resources unavailable to anyone else (the Bulls had Michael Jordan, the Saudis have oceans of oil), barriers to competition [patents, government licenses and other prop-ups (or is it props-up?)], and cheating.

Speaking of coming back to the pack, Rupert Murdoch's takeover of the Wall Street Journal resulted in a tripling of my individual subscriber rate. I had held a multi-year subscription and had gotten used to paying an annual price, with professional discounts, of around $100. After receiving the renewal offer of $325 at the end of last year, I declined. Although I am philosophically closer to the WSJ than the Times or the Chronicle, I didn't think twice about rejecting this extravagant price hike. It's a free country, and, unless we're talking about the Patient Protection and Affordable Care Act, I don't have to buy anything.

After months of don't-you-miss-us and don't-you-need-us notices, a promotional offer of $144 for one year came in the mail.

I sent in a check the next day. Why the old-fashioned medium of payment? I don't want the Journal to renew my subscription automatically by charging my credit card at a much higher rate. "Like" and "trust" are not the same thing. 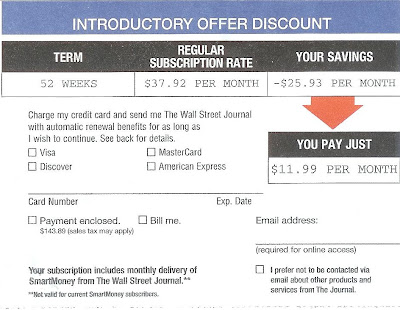 Thursday in the Park

Mother to calf: "not another idiot with a cellphone camera."

We had a traditional Fourth in Foster City---hot dogs, hamburgers, and fireworks.

Posted by Stephen at 8:55 AM No comments: