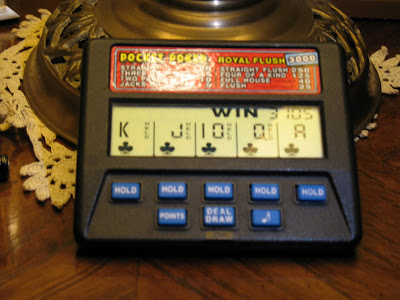 After idly poking at this machine over many months, we finally hit the big prize….the 3,000-point royal flush. We should have devoted more of our hours to this time-waster than to our investments. In the real world our efforts are not only futile but damaging. At least the silly game gives us psychic income.
Posted by Stephen at 10:43 AM No comments:

Focus on the Other

Second Harvest Barrel,
the sixth we've filled this year.
In economics we learned that hardship is self-reinforcing. When businesses go through tough times, they lay off employees, who then can’t pay their bills. The majority who are fortunate to keep their jobs cut back on spending due to worries about their own livelihood. Individual behavior spreads to the group, and the economy sinks.

The world of charitable giving is witness to the same phenomenon. When needs are greatest, people not only are less capable of contributing but want to protect what they do have. Donations dry up when they are needed the most.

I admire the people at my local church. Some are retired and live off investments that have cratered in this year’s market meltdown. Others have jobs and businesses that are dying or teetering. Yet they fight against the natural inclination to hunker down. They put aside fears for their own security and focus on helping the less fortunate. May you, dear reader, do the same.
Posted by Stephen at 12:46 PM No comments:

Byzantium by the Bay

Before
We have been pleased with the tankless water heater that we installed last month, but we still had to get final sign-off on the permit. We had cautioned the installer that the Foster City regulatory process was one of the most Byzantine in the Bay Area, but he assured us that, after dealing with the inspectors in Marin County and San Francisco, a Peninsula city should be easy as pie. He had forgotten that pie is a dish often served with humility.

The crusty inspector pointed out the first problem: the installer had run the gas and water feed along the exterior of the house. About 20 feet of piping had to be rendered invisible from the street, so the plumbers spent another day drilling holes in the walls to reroute the lines to the garage interior.

Next, the water heater had to be lowered from our neighbor’s view so that he would not be disturbed by the unsightly box peeking over the six foot fence. (Although it seems to me that only those who have the most extreme esthetic sensitivity would be offended by the sight of a stainless steel box, one does not argue with building inspectors. By the way, our neighbor’s a nice guy and has never complained, but his successor might.)

The ¾ -inch wrapping around the pipes was insufficiently thick for reasons not entirely clear, especially since other cities deemed that width to be adequate. The local Home Depot didn’t carry one-inch insulation, but our installer located a plumbing supply specialist who did. “Foster City?” the storeowner asked rhetorically.

The final requirement was that the black insulation had to be painted white, again for esthetic reasons. You never know when my neighbor might look at our pipes from his upstairs bedroom and be horrified by the sight of stark black against white. I took pity on our installer, who was operating under a fixed price contract, and said that I myself would slap a double coat of paint on the foam.

The inspector signed off this week. While I have to admit that some of the changes improve the look of the system, I do wonder about the cost of compliance.
© 2008 Stephen Yuen
Posted by Stephen at 2:00 PM No comments:

We Won't Even Realize

(Continuation of above post) Cost-benefit analysis is one perspective from which one may view the accretion of power in our government. But I prefer to look at this subject at the ground level. The personal is the political, goes the saying.

In a thousand ways great and small our freedoms are increasingly circumscribed. I keep an eye on the traffic cameras and slam on the brakes when the light turns yellow. I paint black water pipes white because my neighbor's sensibilities might be offended. I have to check with the city before taking down a fence or putting a new one up. Whether I drive my car every day or once a month, it must pass the same smog inspection every two years. I refrain from making (overly) snarky remarks on this blog and even in friendly e-mails because a comment made in haste could some day come back to haunt me. We have to file all sorts of forms and payments with various agencies, and they must be complete and on time.

We're light years away from living in a 20th century totalitarian state, but more of our actions than we realize are dictated by compulsory rules, whether putting on a seat belt, reaching or not reaching for a smoke or a drink, or paying a nanny. We'll cede more and more of our freedoms during the next four years, and the pity is that we won't even realize that it's happening. © 2008 Stephen Yuen
Posted by Stephen at 1:30 PM No comments:

How I Learned to Stop Worrying and Love Obama

Conservatives in blue states can come out of hiding. Our lives will be better now that Barack Obama will be the next President. And this happy circumstance will have nothing to do with his politics.

For nearly eight years we’ve had to put up with not just whining but vituperative outbursts at home, in classes, at work, on TV, in coffee shops, and in bookstores. Exposure to the enraged is very wearying, if not hazardous to one’s health. Most conservatives avoided political arguments because they often culminated in personal insults and screaming fits.

Frankly, I feared a McCain come-from-behind win because of the anger his victory would have unleashed. (Take the Proposition 8 protests in California and multiply by a thousand.) The Obama triumph, on the other hand, has triggered overwhelming exultation in those who voted for him and only anxiety and disappointment---but very few instances of anger---in McCain supporters. The emotion matrix looks something like this: 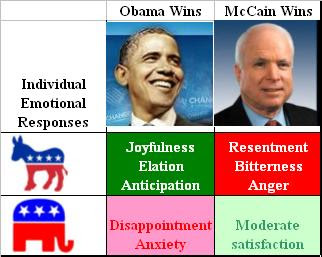 Economists say that we shouldn’t add someone’s joy to another’s sorrow--measuring the group’s overall welfare from the sum of the parts is a methodological minefield--but any married couple will tell you that they make those calculations all the time. He will go to the opera if she will go to the baseball game [reverse the pronouns’ gender to make the last sentence more palatable, if you like]. In either case the happiness experienced by one far outweighs the mild unhappiness and boredom experienced by the other, and the net wellbeing of the couple is positive.

From a group perspective an Obama victory means that we’ll all get along a lot better. My moderate unhappiness is quickly dispelled if everyone around me is smiling. And what is the value of a mildly satisfactory McCain victory if that means we have to be surrounded by apoplectic rage for the next four years?

Love is in the air. The esteemed Governor of California remarked that, although his candidate lost, I can get back into the bedroom, so there's the big advantage.

And it came to pass, in the months before Barack ascended to his high office, that the pony lay down with the pachyderm. © 2008 Stephen Yuen
Posted by Stephen at 9:00 PM No comments:

I Spoke Too Soon

Stocks have plummeted 10% since my post on Tuesday. Commentators have blamed Cisco's disappointing earnings, higher jobless claims, and the realization that hey, we could be in a recession! But really, all that (except for Cisco, but tech stocks have been emitting mixed signals since late spring) has been known for months. What new information could possibly have come to the market's attention on Tuesday and caused investors to revise their outlook downward? It's a mystery.
Posted by Stephen at 6:41 AM No comments:

....and not because of the outcome of today's elections.

After a dismal three months the stock market has bounced back strongly over the past week, recovering half of its recent losses. If you view the five-day graph the bounce is more noticeable. 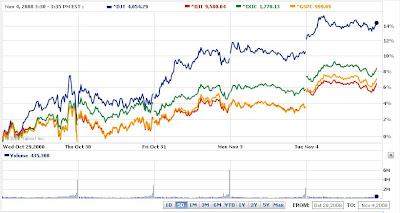 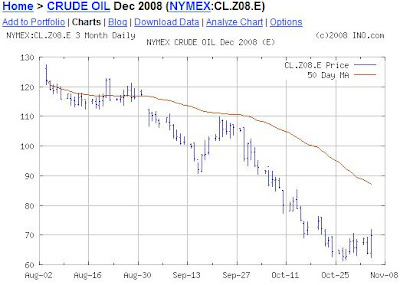 Oil prices trade around $70 per barrel; a scant few months ago the price was over $140. Cheaper gas means more dollars in our pockets.

Even the weather is cooperating. In Northern California there had been signs of another dry winter, which could lead to water rationing in 2009. The weekend storms put us above normal. 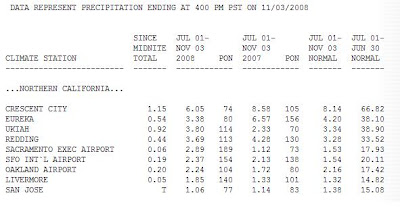 If my candidates win, I'll be happy. But there's reason for optimism even if they don't.
Posted by Stephen at 1:21 PM No comments:

Typo of the Day

The rains came on Halloween--and none too soon—because this year’s precipitation has been well below normal. I switched off the sprinklers for the weekend and waited for the showers to stop.

We joined the line of ghosts, goblins, and princesses snaking over the Beach Park bridge. Despite the inclement weather trick-or-treating in Foster City’s safe neighborhood attracted hundreds of kids this year.

We stopped at Master Perez’ booth. (Herb Perez was an Olympic gold medalist in taekwondo and has built a popular martial arts studio in Foster City.) Everyone who walked by was greeted with a balloon and a friendly word from Master Perez. With his young family, new house, and prosperous business, he’s often remarked how lucky his life has been. I think that we’re the lucky ones.

Hospitable Couple
We exited Farragut Park to check out the decorations. Some homeowners went through elaborate efforts in setting up audio-visual equipment and re-doing their whole front yard. Others just passed out candy, while a nice couple poured hot coffee and apple juice for all comers.

The youngster greeted a number of acquaintances and gabbed with other teenagers. Most teens didn’t really care about the candy. What drew them out was the primal urge to see and be seen and maybe to get away from their parents. My guy still likes having me around, but I have to maintain a discreet distance when he’s talking with his friends.

Foster City Halloween 2008
Despite having lived in Foster City over two decades, I lose my sense of direction when wandering the safe neighborhood; the streets curve into dead-end cul-de-sacs and I often have to turn around. This year, though, there’s the magical iPhone with GPS! The flashing blue dot marked our position on the map and we found our way back without any trouble.

Soon he’ll be too old to go trick-or-treating. In my second childhood I’ve found that I enjoy mingling with other parents and seeing familiar faces out and about. Maybe Master Perez can use a helping hand next year. © 2008 Stephen Yuen
Posted by Stephen at 10:56 AM No comments: