Just like I did a year ago, I went to the stockbroker's office and executed a partial Roth conversion, deliberately triggering taxable income now in order to lower the tax bill in future years. One assumption behind that move is that investments in the Roth account will grow significantly, at least to such an extent that the conversion will be deemed in retrospect to have been worthwhile. Phrased more simply, I am an optimist.

I had one or two goals---resolutions, if you will---for 2011 that were accomplished, but the rest lay incomplete because of efforts that ranged from the desultory to the earnest college try. Nevertheless, I will put them on the New Year's list and try again.

I remain on speaking terms with loved ones, have reasonably good health, and have enough money to pay the bills. May you be blessed at least as much in the New Year.
Posted by Stephen at 11:55 PM No comments: 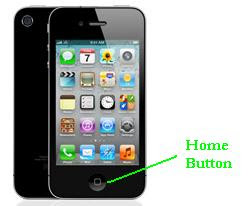 iPhone users press the Home button throughout the day as they flip between applications. When it stops working, as mine did last week, the problem can be profoundly irritating. (If I wanted to move from making a phone call to, say, the maps application or the calendar, I would have to turn off the phone using the power button, then turn it on again.)

Several websites advised that the culprit was likely buggy software, so I went through the two-hour process of restoring the iPhone to its factory settings, then reloading apps, music, and photos. No luck, Home was still non-functional.

After some detective work, I am 99% sure the problem was the "free" MyATT app that had been installed earlier this month. The app did have some neat features---it analyzed data and voice usage on all four lines, showed when they could be upgraded, and made it easier to pay the bill--but the benefits certainly weren't worth the cost of disabling the Home key. After deleting the MyATT app on both the computer and iPhone, and again performing a Restore, the functionality is back.

I doubt I'll be installing any more apps from AT&T. This experience also confirms the general principle that one should not add programs to one's devices merely because they look cool; the programs should be useful and/or entertaining on at least an occasional basis.
Posted by Stephen at 11:06 AM No comments:

It's Hard to Play Soft

A ukulele artist takes it down several notches and gifts us with a quiet "Silent Night." Instrumentalists and singers know that it's very difficult to play softly and slowly, when every off-key note, scratch of the bow, or uneven breath is noticeable. Thanks, Jake, and Merry Christmas (from Tim's brother).

Posted by Stephen at 4:39 PM No comments:

The frost dusts the rooftops on this Christmas morn. I light the furnace and get the newspaper.

In the lagoon there are ducks who haven't gone south---it can't be that cold. Perhaps my sensitivity to low temperatures is a sign of advancing age. I must book another trip to the Islands soon.

But first I need to get ready for church. That, after all, is the Reason we have shopping, cards, caroling, and decorations.

Merry Christmas!
Posted by Stephen at 9:53 AM No comments:

The People's Republic Can't Keep the Lights On

They put off basic maintenance, they are distracted by goals having nothing to do with the primary mission, and they appoint bosses because of their political loyalty, not expertise. The lights went off in the People's Republic of North Korea long before their leader died, and the only heads that are rolling are not of those who are responsible but of those who complain. The contrast with the prosperous South is like night and day.

In San Francisco the lights flickered out on Monday at the Steelers-49ers game when much of the nation was watching. The comparison to North Korea may be unfair (and too delicious to pass up), but there is a larger point to be made.

Candlestick Park is slated for oblivion. The aging power grid and conventional power generators may eventually end up on history's ash heap. But while we still need the old infrastructure it is the height of foolishness to neglect its importance, funnel resources to unproven technologies at its expense, and disparage the people and companies who make it work.

Dreamers who have never heard of the Second Law of Thermodynamics think we can beat our nuclear reactors into windmills and solar panels. Even if the self-proclaimed visionaries do know their physics, a basic IRR calculation on a $50 financial calculator should have given them pause. Now the bulbs are dimming all across America.

Posted by Stephen at 2:58 PM No comments:

The Jagged Line of Freedom

In Washington, D.C., rules are going in the opposite direction. They are exploding in reach and complexity. They are created under a cloud of uncertainty, and years after their passage nobody really knows how they will work. [snip]

Unlike other vocal conservatives, Jeb Bush doesn't attribute sinister motives to big-government advocates. The gigantism of the state may even spring from the well-meaning attempt to protect capitalism's losers. But the cost to innovation and animal spirits has been too high.

Jeb Bush's conservatism with a velvet glove may just be what (and who) Republicans have been searching for. Four years ago the wounds were too raw for yet a third member of the Bush family to be part of the national ticket. In 2012 the circumstances are very different.
Posted by Stephen at 11:44 AM No comments:

The car's in the shop again. I've been taking Sam Trans to Millbrae, then BART-ing to the City. The total cost for the round trip: $8.50 for BART and $4.00 for the bus. That's the ala carte price. Monthly passes can be more economical, but consultancy gigs don't require my presence in San Francisco every day.

The walk home from the bus stop takes me through the shopping center. The outdoor tables at the Middle Eastern pizza restaurant are filled with patrons puffing on hookahs.

During the winter the patio heaters alleviate the chill, and houses across the water have lighting displays. 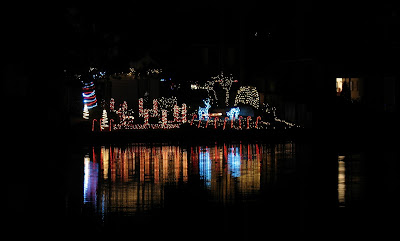 Car repairs can be inconvenient, but the lengthier commute that is forced upon the traveler can make one notice what's going on in the neighborhood.
Posted by Stephen at 11:15 AM No comments: 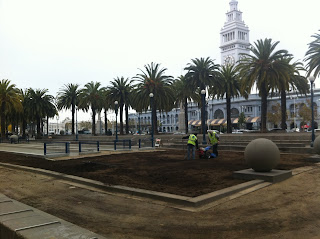 The tents have been cleared, and the disaffected, disgruntled, and dyspeptic have left the premises. City sanitation workers are sterilizing the scene.

I don't agree with extreme environmentalists who believe that human beings blight the earth. However, I must admit that the plaza is looking a lot more appealing now that it's been emptied.

Could that have been the plot all along, acting the opposite (trashing the environment) of one's belief in order to provoke a reaction (tighter environmental restrictions) that will further the ultimate goal? That's like saying we should arm drug gangs in the hope that appalling gun violence will result in tighter gun control. No, no one would be that callous.
Posted by Stephen at 3:22 PM No comments:

I'd Rather Be Skating 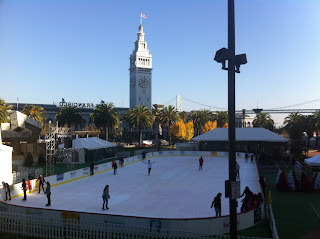 On weekdays the rink is mostly empty. Many skaters are walkups renting a pair on impulse--Eastern transplants recapturing joyous moments from their youth, tourists wanting a picture of skating(!) in San Francisco(!), and parents teaching their children what Mommy and Daddy did for fun as kids growing up in Michigan.

A few feet away the mood changes to resentment. Signs proclaim solutions to the economic malaise. The remedies invariably involve taking stuff away from politicians, bankers, and other fat cats who got rich through thievery, not hard work. Well, perhaps some did. Meanwhile, the occupiers sit on real estate next to pricey San Francisco office buildings that are filled with hard-working saps (who are doing well comparatively but, take it from me, are not in the 1%) who pay taxes so that police can protect the squatters, and workers can empty their port-o-potties.

The tents have been up for over a month. I suppose if I chose to sit around in the cold for weeks on end the anger would build in me, too. 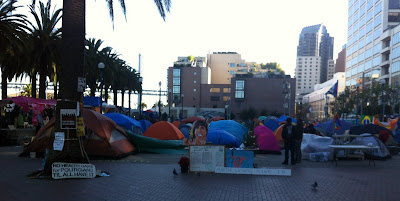 Posted by Stephen at 7:53 AM No comments:

[The following is an update of my post of three years ago.]

On December 7, 1941 Japanese bombers obliterated the U.S. fleet at Pearl Harbor. My father, a junior at William McKinley High, saw the silver planes flying overhead on that clear Sunday morning. He didn’t realize anything was out of the ordinary until he saw smoke rising from the Ewa (western) side of Oahu. My mother, a middle-schooler at Robert Louis Stevenson Intermediate, was preparing to go to Sunday services downtown.

It was a day that changed everything. Millions of Americans, including Dad and his six brothers, answered the call.

While the majority survived the War with life and limbs intact, hundreds of thousands did not, like my wife’s uncle who died somewhere over the Pacific. His body was never found.

Some found the armed services to be to their liking and made it a career, like my uncle who was the best auto mechanic I ever knew. Others, like my father-in-law, seized the opportunity offered by the GI bill and went on to college and jobs that they would never previously have considered.

At the U.S.S. Arizona memorial the names of the fallen are inscribed on the wall. Are we worthy of their sacrifice? Perhaps......if we preserve, protect, and pass on the gifts they have bestowed to us.
Posted by Stephen at 5:49 PM No comments:

My 401(k) has been invested in stocks of industrial companies. As of this morning it was up 4.4% for the year, in line with the performance of the Dow and above the NASDAQ. [Update: the indices were higher by another 0.6% to 1.1% today.] That may sound positive, but it's been a stressful ride.

Portfolios have swung +/- 10% in a few days. Individual stocks can be even more volatile, of course, but it's distracting when sharp ups and downs occur to diversified holdings consisting of more than a dozen stocks and mutual funds and when the daily market gain or loss is a multiple of one's paycheck.

Just yesterday the smart money was moving to euro investments because the Europeans supposedly had their act together much better than the Americans. That orthodoxy turned on a centime. The problems of the European currency now threaten to bring down the global financial system.

My advice for dealing with macro problems: play videogames, read escapist fiction, and watch football. It's better than worrying about problems one can't control.

[Update - 12/7: there's ego satisfaction, but not much else, when a major publication comes out with an article on this subject:

Picking winners during the past few months of uncertainty has proven difficult for most investors -- even the pros. While stocks are up 5% for the year, they've had an unsettling climb. Many investors have fled stocks for bonds, only to find that most bond yields are sinking and most bond fund managers are trailing their benchmarks thanks to bad bets on riskier issues. Even investments that are supposed to zig when the market zags, like oil and gold, have been moving much closer with stocks, making it difficult for investors to figure out the next step.] 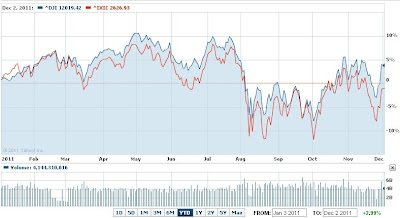 Posted by Stephen at 4:19 PM No comments:

Since the Dawn of Man there has been an irresistible urge to run our fingers over large smooth objects. 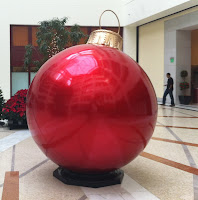 I paused on my lunch break.

The holiday decorations at the old Southern Pacific building consist of mammoth red and gold balls placed in the middle of the walkway. Not mounted on a pedestal, they demand to be touched. The artist seems to be saying, stop, rouse yourself from your preoccupations, see and feel this colorful, massive object.

It soon will be Christmas, when something colorful and massive came into the world. Did you even stop to notice?
Posted by Stephen at 5:08 PM No comments: