The Land of the Quick Fix

In the land of the quick fix the citizens are easily taken in. They believe that they will lose 30 pounds in a month by popping a pill, when doctors say that what’s needed is at least a year of diet and exercise. They think that house prices will be restored now by the government buying up toxic mortgages that no sane financier would touch with his own money. They’ll solve the ancient blood feuds of the Middle East if warring tribes would just sit down and talk to each other in an encounter group and maybe try role playing.

And in the biggest quick fix of all they will soon open the spigot of spending and spend, borrow, and tax their way to prosperity.

[One problem is that it’s going to be big, but it sure won’t be quick.] 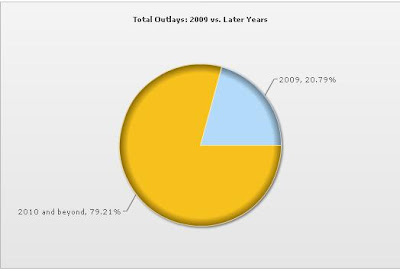 Like a gambler who doubles his markers trying to get back to even, we will dig the hole so deep that maybe we can't get out. Perhaps the Iraq war was a disaster, but at least President Bush pretty much fixed it by the end of his second term. It’s going to take more than two terms to fix the problems caused by this administration, and it’s only been in office one week.
Posted by Stephen at 12:03 PM