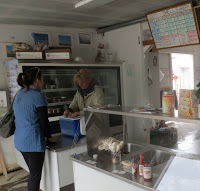 In 2013, despite the entreaties of California Senators Feinstein and Boxer, the Obama Administration shut down the oyster farm in Drakes Bay (store pictured on right).

The oyster farm had been operating safely since the mid-20th century, but the Interior Department declined to grant a lease renewal.

One might well have thought that environmentalists would have wanted to showcase Drakes Bay Oyster Farm as an example of a "sustainable" enterprise that protects the environment while benefiting consumers, workers, and owners.

But the mask slipped. IMHO, progressives use kind words if they do not hold the dominant hand. When they were in a position to dictate Obama environmental policies, compromise fell by the wayside.

Perhaps they realized that overriding their political allies in Northern California was an over-reach, however, because there have been no signs that the oyster farms in Tomales Bay are on the chopping block.

To shore up oyster farming the Marin Agricultural Land Trust granted a long-term easement to the Hog Island Oyster Company. Hog Island will use the easement for its land-based activities such as oyster holding tanks:

It’s the first easement involving aquaculture in the history of the land trust, which was established in 1980 and has set aside more than 54,000 acres of Marin County farmland from development...

The MALT easement designates 8 acres for mariculture, or shellfish farming activities, and leaves some acres alone because they are in riparian areas.

The Marin Agricultural Land Trust is a non-profit trust that

has protected more than 54,000 acres of Marin farmland, forever. MALT’s model of using conservation easements to prevent development has been replicated to save family farms all over the country.

MALT is opposed both to developers and environmentalists that seek to convert farmland to another purpose (or no purpose at all).

Plaudits to MALT for its support of Hog Island Oyster Co.; if that business is not environmentally acceptable, then no business is.
Posted by Stephen at 6:30 PM