This Project is Not Underwater

Whether or not we agreed with the premise that global warming will endanger coastal cities, we didn't really have a choice in voting for a $90 million levee to be built. 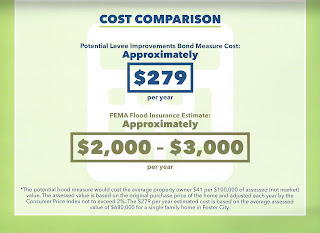 Property owners faced a decision in 2017: vote for the levee and pay an additional $279 per year in property tax, or pay flood insurance premiums of at least $2,000 per year.

(Those who didn't have a mortgage would not have been forced to purchase coverage, but these owners were relatively few.)

Your humble blogger resented the obvious nudge--let's call it a shove--but voted for Measure P anyway.

So far the project criteria are being met:

The steel is thick enough to resist not only earthquakes and strong storms — and the pressure of the 100,000 cubic yards of new soil that will be packed in behind the interlocked plates — but to support an addition when and if there’s a need to go higher.

It's been decided, so we may as well look on the bright side: property values may be boosted because buyers will believe that living in Foster City is marginally safer than elsewhere along the Bay; also, construction projects like these never get cheaper; and if sea levels do rise (I give it no more than a 10% chance in my lifetime) then it will have been worth the expense.
Posted by Stephen at 10:14 AM